THIS NOVEMBER ON ARROW VIDEO CHANNEL: THE EXCLUSIVE PREMIERE OF THE EL DUCE TAPES, THE WEIRD AND WILD FILMS OF WILLIAM GREFÉ, BAN THIS SICK FILTH! AND SO MUCH MORE!

ARROW VIDEO CHANNEL is the passion-driven film platform giving film fans the opportunity to watch a curated selection of movies that the Arrow Video brand is famous for.

On November 2nd, the Arrow Video Channel is premiering the insane, astounding new music documentary The El Duce Tapes, as well as an unmissable selection of brand new additions to the channel. Directed by Rodney Ascher and David Lawrence, with interviews directed by Ryan Sexton, The El Duce Tapes is a unique, outrageous portrait of a controversial, legendary underground the self-styled “King of Sleaze”, described on American national television as a ‘disgusting pervert’, a hugely divisive, troubled figure who was a skilled musician and prescient provocateur.

From the very opening scene, The El Duce Tapes is uncomfortable, but utterly riveting viewing, an extraordinary glimpse into a very curious and disturbing corner of music history that, as Sight & Sound says, “leads right to the present day”.  Strange, savage and unsettling, the film that John Carpenter calls “dark and irresistible” stands alongside American documentary classics like Crumb, Dig!, American Movie, Hated and The Devil and Daniel Johnston.

You can see it on the Arrow Video Channel – the home for weird and wild cult classics, newly-restored gems, and genre favourites, available on Amazon Prime Video.

Also showing on the Arrow Video Channel from November 2nd: Exploding onto the screen in a kinetic flurry of hyper-stylised action, The Villainess is a stunning vengeance film that draws its inspiration from western classics including Nikita and Kill Bill. Deliriously indulging in the excesses of South Korean action, this is a visionary new take on the neo-noir genre and an incredible thrill ride not to be missed.

ARROW EXCLUSIVE
HE CAME FROM THE SWAMP: THE WILLIAM GREFÉ COLLECTION (UK/US/CA)

In an Arrow Exclusive, plunge into the wild, weird world of William “Wild Bill” Grefé, the maverick filmmaker who braved the deep, dark depths of the Florida everglades to deliver some of the most outrageous exploitation fare ever to go-go dance its way across drive-in screens. You will encounter demented jellyfish men (Sting of Death), zombified witch doctors (Death Curse of Tartu), homicidal hippies (The Hooked Generation) and seductive matrons (The Naked Zoo) – not to mention the ubiquitous go-go dancing college kids, in one of the most wildly entertaining collections of cult oddities of all time! 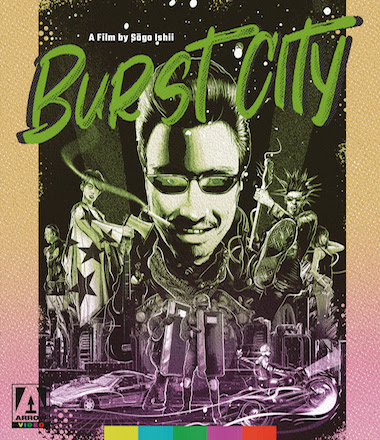 An explosive Molotov cocktail of dystopian sci-fi, Mad Max-style biker wars against yakuza gangsters and the police, and riotous performances from members of real-life Japanese punk bands, this extraordinary celebration of Japan’s punk music scene of the early 1980s is regularly cited as an early landmark in Japanese cyberpunk cinema.

The climactic roar of “Don’t fuck with me!” in Burst City perfectly encapsulates the angry howl of youth in revolt against the establishment that has echoed across generation after generation. Rebel Yell is a season of ARROW films that celebrate the rebel and the ever-identifiable need to go your own way, be yourself, find your people, or just let loose a cathartic scream. Including titles such as Deadbeat at Dawn, Teenage Yakuza and more.

Women who dared to be different. They defy the humdrum monotony of the status quo and challenge expectations. From riot grrrls to kick-ass queens, these women smashed the glass ceiling to disobey, disrupt and do things their own way. Including titles such as Season of the Witch, She-Devils on Wheels and Blind Woman’s Curse.

‘They eff you up, your mum and dad’ – so said the esteemed poet Philip Larkin, who had no doubt been binge-watching some dysfunctional-family horror flicks, like Magnum Force director Ted Post’s indescribably disturbing man-child melodrama from the Seventies, The Baby; Wes Craven’s cannibal classic The Hills Have Eyes, featuring a cave-dwelling clan snacking on passing tourists; or Toys Are Not For Children, a sordid sliver of daddy-issues horror from the American drive-in circuit. Effed Up Families, includes all these and many more, including Russian dad-from-hell comedy Why Don’t You Just Die!, Eighties Freudian vengeance slasher Blood Rage, and José Ramón Larraz’s claustrophobic, erotic psychodrama Whirlpool. It’s fun for all the family, ARROW style!

PLUS! Don’t miss out on your ARROW ESSENTIALS with our GIALLO and ASIA EXTREME collections that are guaranteed to send shivers down your spine.

About the Arrow Video Channel

The ARROW VIDEO CHANNEL gives cult movie fans the opportunity to watch a wide selection of movies that the ARROW VIDEO brand has been famous for – personally curated by members of the Arrow team. From horror to sci-fi, thrillers to westerns, the ARROW VIDEO CHANNEL is home to cutting edge cult and undiscovered gems such as Takashi Miike’s Audition, Wes Craven’s seminal masterpiece The Hills Have Eyes, George A. Romero’s contagion classic The Crazies, Edwin Brown’s slice-and-dice staple The Prey and so much more. In the coming months the ARROW VIDEO CHANNEL will be adding cult classics from Alejandro Jodorowsky including The Holy Mountain and American made horrors such as, The Deeper You Dig, Children of the Corn 2&3  and The El Duce Tapes. In addition to crowd pleasing cult movies on the service, the ARROW VIDEO CHANNEL will continue to give you an exclusive platform to brand new genre as part of a new global strategy.

The ARROW VIDEO CHANNEL also hosts a growing collection of documentaries, interviews and never-before-seen content from the Arrow Video archives, as well as newly produced material. These documentaries will breathe new life on the ARROW VIDEO CHANNEL, giving movie fans an immersive look into the creation of many cult movie classics such as Donnie Darko and Hellraiser. The service will be updated regularly with new content, new curation focus and never-before-seen content, all hand-picked by the Arrow Video team.

Home of Cult Movies. ARROW is here to give you a premium viewing experience across multiple devices so you can explore the movies that the Arrow Video brand is famous for. Personally curated by members of the ARROW team, every title joining the service gets our stamp of approval.

ARROW will be home to cutting edge repertory cinema – such as the works of Herschell Gordon Lewis (Blood Feast, The Wizard of Gore), Latin American Giallo Crystal Eyes, the Kaiju king Gamera, Cyberpunk nightmare Tetsuo: The Iron Man, Wes Craven’s seminal masterpiece The Hills Have Eyes and so much more. In the coming months, ARROW will be adding more weird and wonderful cult curios selected by the team at AGFA (American Genre Film Archive), Japanese zombie horror Versus along with North American horrors and festival favorites as part of our global strategy to support and celebrate New Cult.

ARROW will also be home to an ever-growing collection of interviews, documentaries and additional extras, newly created just for the service and from our archives. The service will be updated regularly with fresh content, new curation focuses and never-before-seen content, all hand-picked by the ARROW team. We are here to bring you the best of what you know us for and so much more.